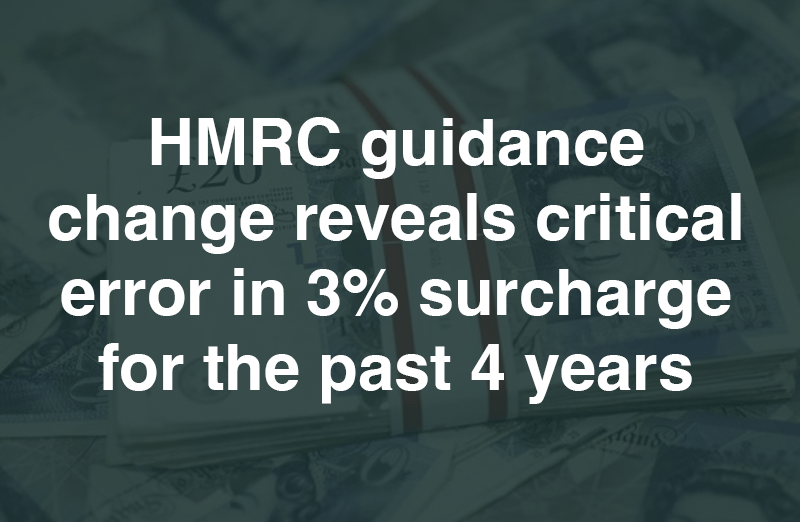 HMRC recently updated its guidance on the 3% Stamp Duty surcharge, no doubt hoping that a list of fairly dull and unexceptional adjustments and clarifications could help hide one particular bombshell climbdown that it was making – But despite its earlier denials but there is a minimum rate of 1% on the residential element of a multiple dwellings relief calculations and not the 3% but they previously stated applied in all cases.

This Bad News (for them) was “Buried” in among the various clarifications and examples of when the surcharge would and would not apply, which they attempted to pass off as another minor clarification.

In actual fact, this last ‘clarification’ represented a complete U-Turn on a position that had been a source of contention since the Higher Rate Additional Dwelling surcharge was introduced back in 2016.

It has been our position since the rate was introduced that it simply did not apply to purchases of mixed-use properties any more than it would to non-residential properties. HMRC disagreed, laying down in its guidance that where a claim for Multiple Dwellings Relief was made, then the surcharge applied, regardless of the specific composition of the property in question.

This was plainly nonsensical, as many MDR claims are made on purchases of – for example – blocks of flats with commercial premises attached. It would make no sense in these circumstances to apply a charge specifically designed to attach to the purchase of additional residential properties – a category from which mixed-use properties are excluded.

Now, HMRC has amended the guidelines to state that where an MDR claim is made on a mixed-use property against the dwellings within it, then the surcharge does not apply! This reduces the minimum rate of SDLT on the dwellings from 3% to 1%.

They then go to say IF the non-residential elements of the transaction are ‘negligible or artificially contrived’, then the HRAD will still be applied to the transaction. This view in and of itself also contradicts the law – there is NO “negligible” test whatsoever in the legal definition of Residential Property for SDLR rate purposes.

So this would seem to be another standard confuse and deter move by HMRC to warn people off from doing what is their right as taxpayers. Deterrence only works however if the potentially deterred remain ignorant about the true position.

Like the definition of the word ‘dwelling’ before it, expressing things in nebulous and undefined terms leaves HMRC, in their minds, some “wriggle room” to squirm out of having to deal with perfectly valid claims to MDR  and this may suit their purposes as many people have already overpaid based on their previous erroneous guidance and are already seeking refunds of tax that was never due since April 2016.

It also acts as a deterrent to developers, investors taxpayers and their advisers who are currently purchasing, who may feel more cautious about claiming statutorily available reliefs against their acquisitions for fear of their transaction falling the wrong side of whatever line may be drawn, should HMRC choose to litigate.

Rather that admit that their previous guidance was incorrect, this feels like a move decided to frustrate the effect of the correct interpretation by another, more oblique route.

What should I do?

A typical multi-unit acquisition will therefore have overpaid the tax on acquisition of the development/investment equivalent to 2% of the residential value previously assessed this could equate to £20,000 pounds per £1 million.

Those affected should therefore undertake an immediate review of all transactions since 2016 in order to understand whether:

1. They paid SDLT on a MDR Claim at the wrong minimum rate

2. They didn’t claim MDR at all because the incorrect HMRC Guidance gave a higher figure to the MDR claim than the Mixed-Use rate which would have applied to the buildings.

Over the last 12 months, we have recovered over £2m in overpaid SDLT on these types of transactions for clients.

We believe that because taxpayers and their advisors will have followed HMRC Guidance on this they may not be aware of the opportunities that this change actually offers.

5 ways to save on Stamp Duty Land Tax

How Cornerstone can help

We can undertake detailed forensic review of all transactions since April 2016 to identify whether you have suffered a loss through overpaid tax in these circumstances and manage the claim for a refund with HM RC on your behalf.

Our fees are 25% plus VAT (if recoverable) of the refund received on a “no refund – no fee basis”.