Thousands of dentists could be owed £50,000 on overpaid Stamp Duty Land Tax 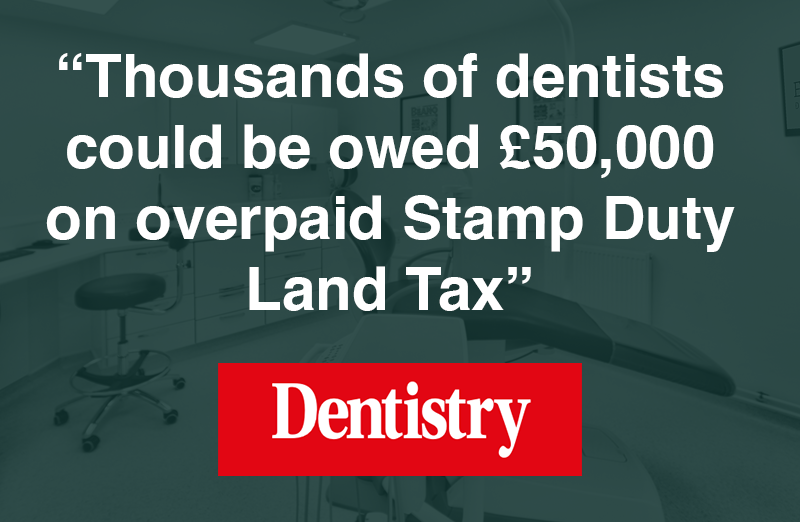 Read our feature in Dentistry 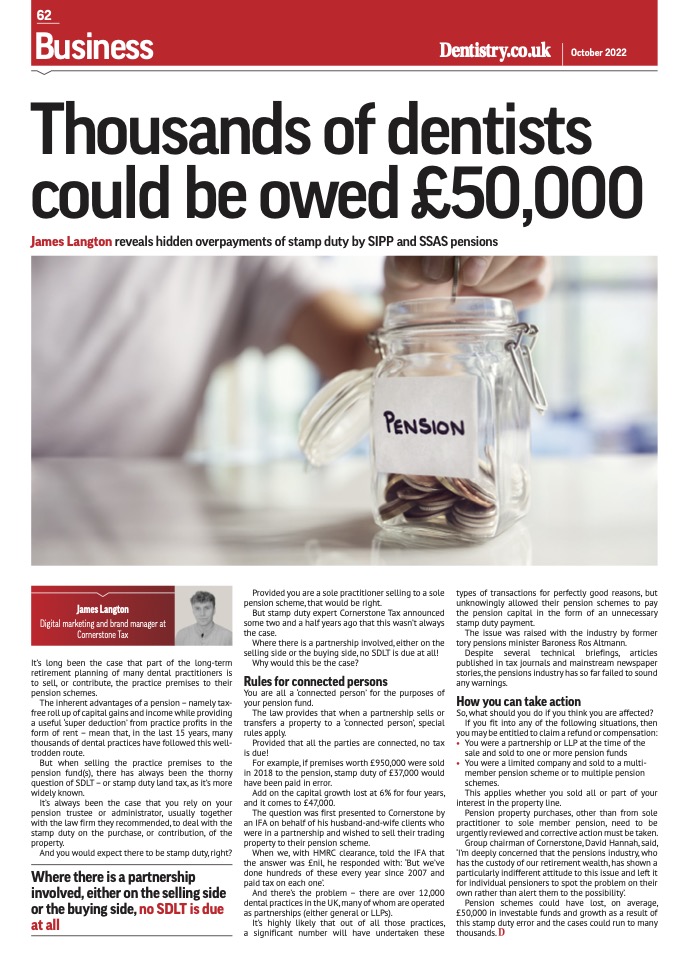 “It’s long been the case that part of the long-term retirement planning of many dental practitioners is to sell, or contribute, the practice premises to their pension schemes.
The inherent advantages of a pension – namely tax- free roll up of capital gains and income while providing a useful ‘super deduction’ from practice profits in the form of rent – mean that, in the last 15 years, many thousands of dental practices have followed this well- trodden route.

But when selling the practice premises to the pension fund(s), there has always been the thorny question of SDLT – or stamp duty land tax, as it’s more widely known.
It’s always been the case that you rely on your pension trustee or administrator, usually together with the law firm they recommended, to deal with the stamp duty on the purchase, or contribution, of the property.

And you would expect there to be stamp duty, right?

Add on the capital growth lost at 6% for four years, and it comes to £47,000.
The question was first presented to Cornerstone by an IFA on behalf of his husband-and-wife clients who were in a partnership and wished to sell their trading property to their pension scheme.
When we, with HMRC clearance, told the IFA that the answer was £nil, he responded with: ‘But we’ve done hundreds of these every year since 2007 and paid tax on each one’.

And there’s the problem – there are over 12,000 dental practices in the UK, many of whom are operated as partnerships (either general or LLPs).
It’s highly likely that out of all those practices, a significant number will have undertaken these
types of transactions for perfectly good reasons, but unknowingly allowed their pension schemes to pay the pension capital in the form of an unnecessary stamp duty payment.

The issue was raised with the industry by former tory pensions minister Baroness Ros Altmann.
Despite several technical briefings, articles published in tax journals and mainstream newspaper stories, the pensions industry has so far failed to sound any warnings.

How you can take action

So, what should you do if you think you are affected? If you fit into any of the following situations, then you may be entitled to claim a refund or compensation:

This applies whether you sold all or part of yourinterest in the property line.

Pension property purchases, other than from sole practitioner to sole member pension, need to be urgently reviewed and corrective action must be taken. Group chairman of Cornerstone, David Hannah, said, ‘I’m deeply concerned that the pensions industry, who has the custody of our retirement wealth, has shown a particularly indifferent attitude to this issue and left it for individual pensioners to spot the problem on their
own rather than alert them to the possibility’.

Pension schemes could have lost, on average, £50,000 in investable funds and growth as a result of this stamp duty error, and the cases could run to many thousands.