How much Stamp Duty do I need to pay? The complete guide – Avoid overpaying 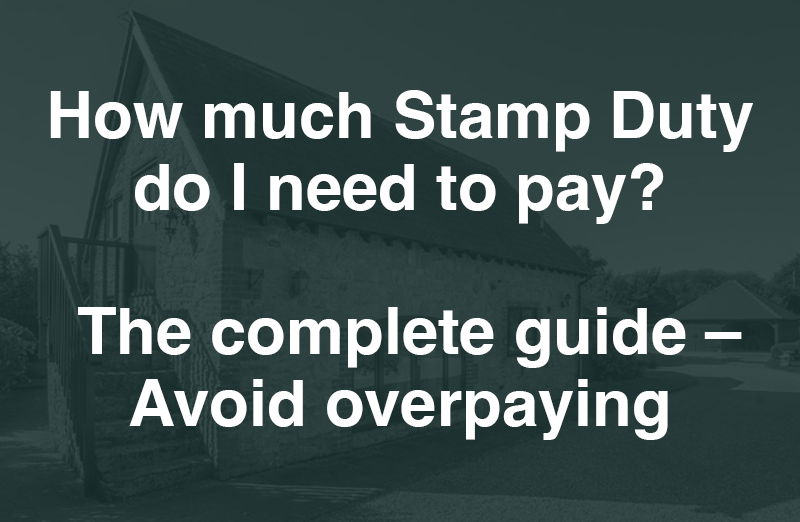 If you’ve ever bought and/or sold property in England, or indeed been paying attention to the news for the past year, you’ve likely heard the term ‘Stamp Duty’. SDLT stands for Stamp Duty Land Tax, which is referring to the exact same thing, only correctly.

In fairness, the various different terms people use for SDLT is possibly the least confusing thing about this property tax.

Charged to the buyer on the transfer of property for consideration (payment, either in cash or other formats), and based on the amount of that consideration, most people don’t even realise that SDLT is a personal, self-assessed, tax meaning that although you may have left your solicitor to work it out for you, responsibility for the amount paid lies with you as the buyer, not the lawyer. If it’s wrong, it’s down to you to rectify it, in other words.

As you can see, the more expensive the property, the higher the SDLT cost, and the more complexity is involved in working it out. But that’s just the tip of the iceberg.

Those rates above apply to residential property in normal circumstances. However, the government has a habit of tinkering with SDLT whenever it’s looking for a quick, simple answer to a complex problem, adding further confusion into the mix. You’ll likely be aware of the so-called ‘Stamp Duty Holiday’ the Chancellor announced in 2020 which was due to end at the end of March 2021 but then extended until the end of June.

This raised the 0% threshold on all property purchases to £500,000. Post extension and until the end of September, that threshold was reduced to £250,000, as the government attempted to gradually step down the cut and prevent the tsunami of failed transactions predicted by property industry experts. Post 30th September 2021, the 0% band will drop once again to £125,000. Unless you’re a first time buyer, in which case it rests at £300,000. And we’re still just getting started.

If you are buying an additional residential property – say a buy to let or a holiday home – then changes made in 2016 mean that you’ll be subject to a ‘surcharge’ of 3% on the purchase price, on top of any other SDLT you might normally pay. That means – for those paying attention – that there is no 0% rate band on these purchases, as even at £125,000 or lower, you are paying 3%. You are able to reclaim this if you go on to dispose of your current main residence within a certain period of time, but that’s assuming that you were not subject to one of the exclusions at the time of purchase.

Bought multiple properties in the same transaction? A number of flats for example? You may have been eligible for Multiple Dwellings Relief, a relief in the legislation which can substantially reduce your SDLT bill on such purchases, but one which is often missed by conveyancers, meaning that at the moment claims for such mistakes and the money that was overpaid to HMRC are currently on the rise.

Buying a property with land or an annexe attached? Different rates may apply. Buying a commercial property? Different rates definitely apply. And the really scary thing? In our experience, a lot of transactions go through with the wrong amount of Stamp Duty Land Tax being paid – in the last twelve months alone, we have helped buyers recover a total of over £12 million in overpaid SDLT, from simple residential homeowners to multinational corporations.

You should contact us if you have purchased U.K property in the last 4 years that you paid Stamp Duty on – you could be eligible for a refund from HMRC!

That’s partly thanks to the complexity of the rules catching many advisers out, and partly due to the insufficiency of the calculator provided by HMRC, upon which most of those advisers rely. That calculator misses many of the nuances that can lead to different results for an SDLT calculation from the norm, and HMRC themselves have gone on record as saying it is intended merely as ‘a guide’ rather than a definitive answer.

Happily, there is a solution to the tangled nightmare of SDLT. By enlisting the help of a professional specialist adviser like Cornerstone, you can ensure that all relevant factors are taken account of when your SDLT is calculated, leaving you with the peace of mind of knowing that your Stamp Duty is the right number, and you’ve paid what you owe and no more. Even if you’ve already completed on a transaction and feel you may have overpaid, one call to us can help you start the process of setting the record straight and recovering what’s yours.