Is the new Stamp Duty Holiday enough? Our thoughts… 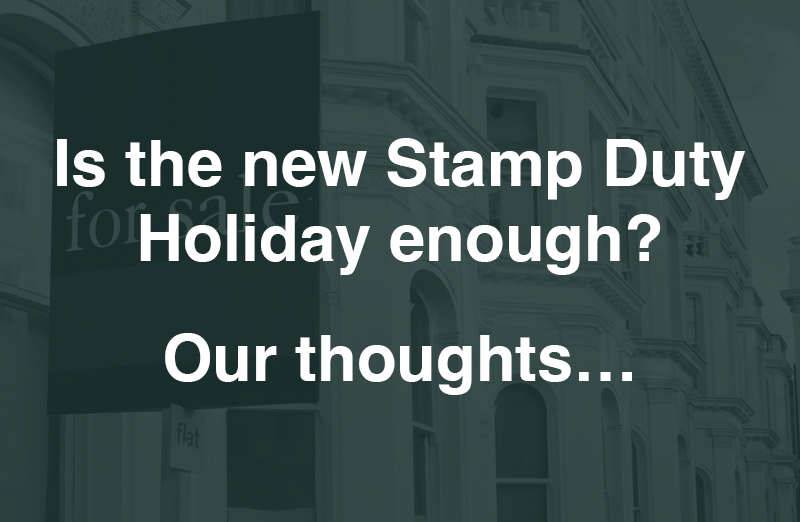 Chancellor Rishi Sunak today announced – as widely expected – an extension to the current Stamp Duty ‘Holiday’, taking the measure to the 30th June, or just after the country is projected to come out of Lockdown fully.

The rapidly approaching ‘cliff edge’ of the 31st March had been a topic of contention for some time, with solicitors, estate agents, and indeed ourselves calling for some sort of allowance to be made to avoid the potentially catastrophic loss of sales unable to complete before the arbitrary deadline as well as the loss of up to £1billion to the treasury that could result.

However, what the industry had also been calling out for was a tapered end to the measures, in order to avoid simply kicking the issue down the road to be dealt with at a later date, potentially with an even greater impact at a time when the economy might need all the help it could get. Until this afternoon, such tapering seemed not to be on the cards, and when the speech came, it offered something akin to a tapered end, but perhaps not quite in the manner expected.

Chancellor Sunak announced that following the new end date of the holiday on the 30th June, there would be a further three months, running to the 30th September, where the nil rate band for SDLT – i.e. the beginning property value at which Stamp Duty kicks in – would be doubled from the usual £125,000 to £250,000.

While this undoubtedly softens the blow for much of the housing market and avoids the ‘hard cliff edge’ it may otherwise have faced, it can’t help but feel to us (and to many others no doubt) like a halfway measure.

According to the UK House Price Index the national average for house prices in the UK now stands at £249,633. While this varies from region to region, the inescapable truth is that a large number of properties fall into this bracket. It would follow logically that if the nil rate band were to be permanently expanded to £250,000, the property market would receive a much-needed stimulus, boosting demand from buyers at the lower end of the market which would, in turn, free up the rest of the market.

Increased demand would also inevitably lead to an increase in property development and house building, which would, in turn, serve to lower average prices and stimulate more movement.

Furthermore, while this ‘tapered’ end to the Stamp Duty reductions is undoubtedly slightly softer than the hard end we previously faced, it doesn’t really soften that blow enough. The suggested tapering was a gradual reduction of the amount at which no Stamp Duty would be payable over the course of a period up to a year. This one-stop 3 month half measure will still result in the very rush on the market that both solicitors and estate agents feared before, and arguably with an average UK house price almost bang on the mark set, lead to an even greater bubble to burst when the time comes.

Read our article in Financial Adviser

We said in July that while the Chancellor’s much-lauded ‘holiday’ measure might provide a temporary stimulus to the market, it would not do as much long-term as proper, long-term measures across the board. Much like previous attempts at influencing the market with quick, easy adjustments to Stamp Duty (such as the 3% Surcharge back in 2016), it seems that once these measures are over, the market may be destined to return to its normal state. It’s time that the Chancellor and the government stopped tinkering at the edges of the current Stamp Duty regime and made real, effective change.

Alter the banding (which has remained the same for a long time now), simply the legislation, and stop giving in to the temptation of making a quick change to grab some headlines. If the last year has taught us anything, it’s that change is desperately needed. We urge the Chancellor and the government to rise to the challenge so that they can really give meaning to their stated aim of making Generation Rent into Generation Buy.