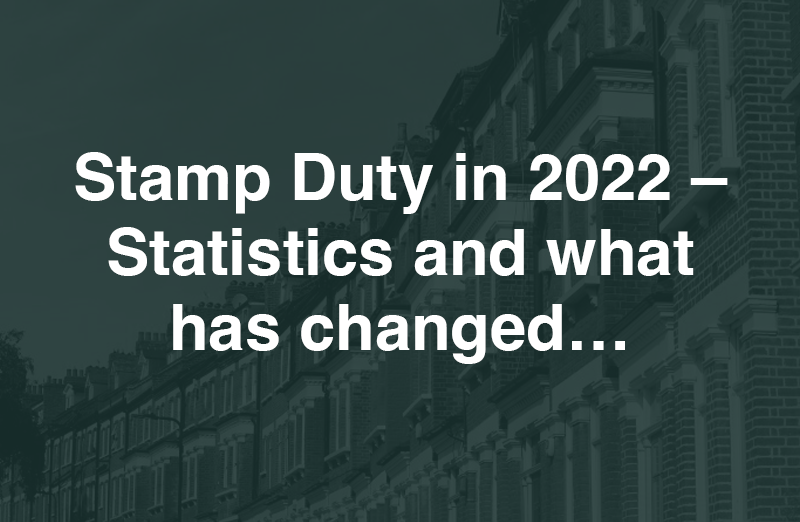 2021 was a tumultuous year for the property market, but what exactly do the numbers say?

The gov.uk website’s latest quarterly Stamp Duty Land Tax statistics commentary makes for some interesting reading. Though largely expected, some of the results of the last twelve months of additional tinkering to the Stamp Duty system in the U.K. are somewhat surprising.

As noted in the commentary itself, the reasons for this drop are fairly self-evident:

“The fall in transactions in the last two quarters followed four quarters of continued growth that were impacted by the introduction of the SDLT holiday for residential properties and an ongoing strength in the housing market.”

“Since then, there has been a fall in transactions over the last two quarters which may well relate to the phasing out of the SDLT holiday.”

Predictably, and as it was supposed to do, the Stamp Duty holiday given by the Chancellor in July 2020 and extended in July 2021 helped to boost the market and increase sales following the severe halt in the market induced by Lockdown and the Covid-19 Pandemic.

Just as predictably, now the holiday has ended, the market has begun to slow again.

Purchases of second residential properties, subject to the Higher Rate on Additional Dwellings charge (the 3% surcharge) also fell, though the receipts in terms of the surcharge rose, suggesting that the additional properties being purchased were larger than before on average.

Interestingly, although the raw numbers suggest an average surcharge amount of a little over £10,000, the statistics also report that:

This suggests that Buy to Let investors were active in the market and adding to their rental stock,  during this period. The avowed purpose of the HRAD – to put the brake on these kind of purchases and free up lower end properties for First Time Buyers – would seem not to be being achieved by the measures, if these numbers are any indication. Of course, the holiday would have meant that the surcharge impacted less than it normally would, but this factor was absent by Q4, meaning that other factors are at play.

Bear in mind also that the specific way in which the surcharge is levied, allowing for refunds to be claimed if circumstances change post completion (i.e. the new property becomes the main residence as the old is disposed of) means that the raw numbers here don’t tell the whole story. We know that during the height of Lockdowns and the most serious initial stages of the pandemic, many people will have looked to leave urban areas for the countryside, or expensive areas like London for cheaper areas further North. These families may well have since sold their original residences and be in the process of making reclaims now.

A rise in total SDLT receipts of 22% from Q3 and a scarcely credible 55% from Q4 2020 becomes more understandable when the new non-UK resident surcharge is considered. This adds an additional 2% to each ‘slice’ of the value of the property on top of the Stamp Duty rates already due on those slices. On a £500,000 property, this doubles the Stamp Duty bill.

Figures given indicate that from the introduction of the surcharge in April 2021 to the end of December 2021, 8,500 qualifying transactions were recorded, generating an income to the treasury of £86million in the surcharges alone.

It must be borne in mind of course, that refunds on the surcharge are available, the same as with HRAD, and the two year window for claiming the refund means that the number is subject to change for some time to come.

First Time Buyers are difficult to assess in context, given the lack of a statutory need to claim the relief during the holiday period. Since Q3 2021, 89,000 claims have been recorded for the relief, totalling £233million, compared to the total amount claimed from its inception in April 2017 to Q2 2020 of £1,293million. This is suggestive of a slowdown in first time buyers accessing the market, which will have inevitable consequences as the ‘knock on effect’ ripples through the market as a whole.

Overall, the picture is of a confusing and uncertain position for the U.K. property market. With inflation at record levels and the Bank of England raising interest rates and warning of the sharpest drop in living standards since the current measurement began in 1990, it’s clear that buying a home might not be at the top of many taxpayers’ priorities in the coming 12 months. These numbers show a market which is slowing in terms of numbers of transactions while returning higher receipts as HMRC effectively squeezes each transaction for a little more money. In the current scenario, this would not appear viable.