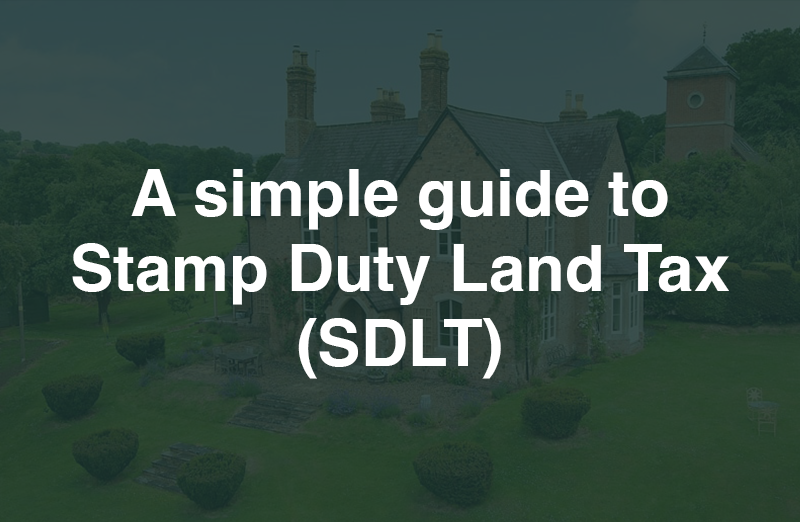 Stamp Duty Land Tax, SDLT, or Stamp Duty as it is commonly (and erroneously) referred to, is a tax paid by purchasers of land and property purchased in England and Northern Ireland (in Scotland it was replaced in 2015 by the Land and Buildings Transaction Tax and in Wales in 2018 by the Land Transaction Tax).

The subject is complex, but we’ve tried to make it as simple as possible…

The amount payable on a transaction is calculated based on the amount of consideration given (i.e. the purchase price) for the property, rather than specifically on the objective value of the property except in certain limited circumstances.

Stamp Duty Land Tax was introduced in 2003 as part of the Finance Act, and came into force in December of that year, replacing the previous Stamp Duty. Stamp Duty derived its name from the physical act of a stamp being placed on the title documents of the property to affirm that the duty had been paid – until this stamp was placed, the transaction was not deemed legally effective.

We have been property tax experts since 2006

SDLT retains the ‘Stamp’ part of the name despite the fact that stamping has nothing to do with the process; though you may still hear some solicitors and other property professionals talking about ‘stamping documents’, it no longer happens.

SDLT also differs in that it is a self-assessed tax against the purchaser, rather than a tax on documents like the old Stamp Duty. The similarity in name has led to much confusion on the part of laymen and professionals since SDLT was introduced. To this day, many solicitors assume that SDLT operates in the same way as the old Stamp Duty, and are unaware of many of its inherent complexities as a result.

Broadly speaking, the SDLT chargeable on a transaction is calculated using the purchase price paid for the property. This used to be fairly straightforward, with different percentages applying to different purchase price brackets – if you bought a residential property for between £250,001 and £500,000, for example, you would pay 3% of the purchase price as SDLT. This ‘slab’ system caused certain tensions in the residential market, as certain price thresholds would cause substantial leaps in SDLT liability when breached. For example, a residential property purchased at £250,000 would attract £2,500.00 at 1% whereas a purchase price of £250,001 for the same property would attract £7,500.00 SDLT calculated at 3%. This obviously caused some concern among residential property buyers and was eventually rectified by an amendment that shifted the tax to operate on a ‘slice’ system. This meant that a certain percentage would attach to each ‘slice’ of the purchase price, so for example for the amount between £125,001 and £250,000 1% would be charged on that part.

Of course, as of the Chancellor’s Statement on the 8th July 2020, residential SDLT has been reduced to 0% on all properties with a purchase of up to £500,000

With non-residential property, the operation of SDLT is slightly different, with 0% charged on properties with purchase prices of £150,000 or less, 2% on the ‘slice’ between £150,001 to £250,000, and 5% on the ‘slice’ at £250,001 and above. Broadly speaking this means that non-residential properties are cheaper in terms of the SDLT liability they attract. Where this gets complicated is in relation to ‘mixed-use’ properties.

Mixed-use refers basically to a property which is not exclusively residential in its use – perhaps a shop with a residential flat above it, a house with a large amount of land for agricultural purposes, and so on. The first issue is simply that there is no one fixed, clear, a catch-all definition in either the legislation or the case-law of what exactly differentiates a residential property from a mixed-use one. The second issue leading on from this is that many solicitors are either reluctant to examine the possibility of a property being mixed-use or remain unaware that the classification may apply and that a reduced amount of SDLT may therefore be due on the property. When one considers the potential size and value of some such properties – large houses with extensive land attached and so on, one can begin to appreciate the scale of the differences involved in the SDLT payable depending on whether the property is classified as a ‘pure’ residential or a mixed-use. And because the tax is self-assessed, the ultimate responsibility lies with the purchaser and HMRC will not actively look to see if the wrong classification has been made of the property on the return.

If all this sounds complex, it really is the tip of the iceberg. Various different factors may be relevant to the assessment of SDLT on a purchase, whether it’s the type of property, the circumstances of the purchaser or the specific way in which the purchase is made. This isn’t helped when the government decides to use SDLT as a big-ticket, easy win item, to try to stimulate the housing market in some way.

In 2011, for example, the Multiple Dwellings Relief was introduced, allowing for lower SDLT bills on purchases of multiple dwellings, in a move designed to encourage the private rental sector. This move allowed for the SDLT to be calculated against the average purchase price calculated from all dwellings in the transaction rather than against each one, leading to considerable savings in many cases. Unfortunately, it was yet another addition to a maze of different exceptions and exemptions, and the definition of dwelling had failed to be laid down in legislation or case law, leading to many contentious cases and an inability for solicitors to always get this right.

Then of course in 2016 the government introduced the Additional Properties Surcharge, paradoxically punishing purchasers of rental properties by loading an additional 3% onto each ‘slice’ of the purchase price – including the zero rate band – in an attempt to slow down the rental market and free up more properties for first-time buyers. That the two measures continue to exist on the statute books gives a rough idea of just how poorly thought out these kinds of measures can be, and the surcharge has shown no evidence of achieving its aims and has in fact merely caused yet more confusion for property buyers and solicitors alike. When is the surcharge payable? When is it refundable? These are all questions which are still unclear to many, a full four years after the measure was introduced.

And the latest change – the so-called ‘SDLT holiday’ announced by the chancellor to great fanfare in July this year, and taking SDLT off the table for any buyers looking at buying any residential property up to £500,000 from 8th July 2020 until 31st March 2021. This was a move designed to reinvigorate a property market which was reeling from the months-long freeze imposed by the national lockdown and was calculated to feed into the need many felt after that time to move to a different type of home. The problem is, like most of these policies, it was ill-conceived.

Eliminating SDLT on these purchases encouraged property owners to feel their properties would be worth more in terms of asking price. Driving up those asking prices meant that while more interest was recorded via sources like Rightmove, the actual sales which completed, as a result, have so far failed to materially alter. Additionally, a nervousness on the part of banks waiting for the recession which everyone seems to feel is coming in the wake of COVID meant that First Time Buyers or those with smaller deposits had little to no chance of securing finance for a purchase.

Add in the uncertainty of the economy generally, the lack of any material changes to the housing market, and those rising prices, and there was no wave of First Time Buyers itching to take advantage of an opportunity which still stood outside their grasp.

Worse still, the presence of a fixed deadline on this ending means that solicitors are already asking the pertinent question of how they will cope with the undoubted influx of clients who insist on completing by the deadline to assure themselves of the advantage of zero SDLT. Conveyancing is not a precise science – delays are commonplace, and in this instance could mean the difference between a home being affordable or not. How much more will the market be hurt by a surge of failed completions which miss this arbitrary line in the sand?

These sorts of changes have all mounted up over the years to create a labyrinthine system of taxation which no man in the street can be expected to understand fully, despite it being their legal obligation. Solicitors are too often relied upon to make a judgment call which is outside their core competencies, making a decision which can – if incorrect – end up costing their clients thousands of pounds and may come back to haunt them years later in the case of an underpayment, when the monolithic machinery of HMRC finally brings its attention to bear.

What is Stamp Duty Land Tax? It’s the tax nobody really speaks about until it’s too late. The tax the average homeowner dismisses as something their solicitor can deal with. The tax most solicitors fail to appreciate the full nuance of – until a claim is made against them. It’s the tool successive governments have clumsily wielded like a sledgehammer on a surgery to try to manipulate the housing market into giving them the quick wins that don’t exist. It’s the most complex, least understood tax which exists in the UK today.

And it’s about time it was recognised as such. When you have a leak, you call a plumber. When you’re dealing with tax, it’s always best to consult a tax adviser.